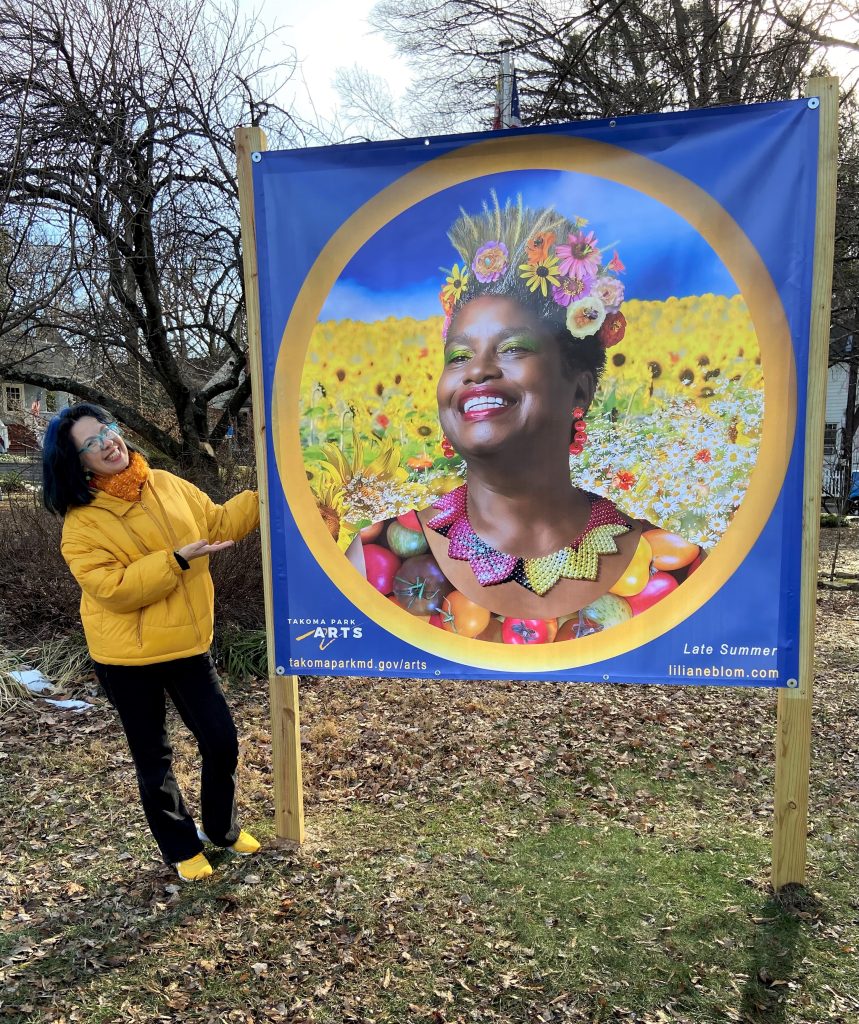 Liliane Blom with her new banner at Memorial Park

The City of Takoma Park’s Arts and Humanities Division commissioned a new banner celebrating the power and diversity of women which is installed at Memorial Park.

The banner features a painting titled Late Summer by Rockville artist Liliane Blom from her Four Seasons series highlighting women of different ages and ethnicities in settings representing the different seasons. The banner includes a portrait of Baltimore R&B and gospel singer Alton Scarborough with a floral background.

“We’re proud to display this banner as a sign of the City’s commitment to racial diversity through the creation of public art that enlivens our community,” Arts and Humanities Coordinator Brendan Smith said.

The new banner will be on display indefinitely at Memorial Park located across the street from the Takoma Park library at 101 Philadelphia Avenue.

The banner replaces a temporary banner of another painting from the same series titled Mid Autumn that depicted a portrait of Nepalese-born Karuna Skariah, an educator and mother who lives in Ellicott City. That banner was part of the #ArtHappensHere project which celebrated the reopening of the local creative economy after pandemic-related closures.

The women featured in the Four Seasons series “embody nature, the seasons, and the great circle of existence,” Blom said.

“Four Seasons showcases women of many ages (from 14 to 90) and ethnicities, including immigrants to our state representing nine countries on five continents. The circle is at the heart of this series with women as the champions of the environment at its center,” Blom said. “The series embodies the beauty and value of all ages and ethnic groups and is intended to combat stereotypes and ageism in  both subtle and powerful ways. It reminds us that nature and humans are intimately and eternally entwined, and we need to protect the earth.”

You can learn more about some of the City’s public art projects on the City’s website.