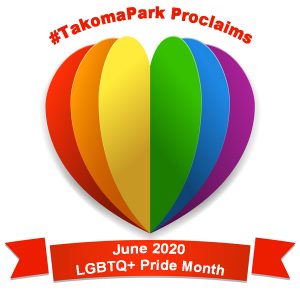 WHEREAS, in June of 1969, patrons and supporters of the Stonewall Inn in New York City staged an uprising to resist the police harassment and persecution to which LGBTQ+ Americans were commonly subjected. This uprising marks the beginning of a movement to outlaw discriminatory laws and practices against LGBTQ+ in the United States; and

WHEREAS, the first Pride march in New York City was held on June 28, 1970, on the one-year anniversary of the Stonewall Uprising; and

WHEREAS, Lesbian, Gay, Bisexual, Transgender and Queer (LGBTQ+) Pride Month is celebrated each year in the month of June to honor the 1969 Stonewall Uprising in Manhattan; and

WHEREAS, June 2020 marks the 50th anniversary of annual LGBTQ+ Pride traditions; and

WHEREAS, Pride Month is a time to recognize and celebrate the impact of LGBTQ+ individuals locally, nationally, and internationally, and the freedom to be themselves; and

WHEREAS, events include Pride parades, picnics, parties, workshops, symposia, concerts, and more and attract millions of participants around the world, and memorials are held for those members of the community who have been lost to hate crimes or HIV/AIDS; and

WHEREAS, the Trump Administration recently removed protections that prohibit discrimination in health care against transgender patients; and

WHEREAS, the City of Takoma Park is a welcoming city that is dedicated to fostering acceptance and welcome of all residents and preventing discrimination and bullying; and

WHEREAS, the City of Takoma Park is strengthened by and thrives upon the rich diversity of racial, ethnic, cultural, general, and sexual identities of its residents.

NOW, THEREFORE, I, KATE STEWART, MAYOR OF THE CITY OF TAKOMA PARK, MARYLAND, on behalf of the Council, residents, and staff, proclaim June 2020 as LGBTQ+ Pride Month.