Public Works staff are preparing to respond to whatever winter sends to Takoma Park’s 34 miles of city-maintained roads, as well as walkways and sidewalks around city parks and public buildings. City staff track potential storms, and prepare to respond as soon as the snow starts to fall. Crews start plowing operations when one inch of snow is on the ground and are prepared to work 12-hour shifts. The city uses Public Works Right of Way staff as primary plow drivers, and sanitation drivers fill in the second shift, if needed. When significant snowfall occurs, city trash and recycling collection may be canceled to allow sanitation drivers to pitch in with road clearing. The city’s Garden Division staff clears public sidewalks at city parks and public buildings during daylight hours, with assistance as needed from temporary laborers. Public Works encourages businesses and residents to do their part to clear snow and ice from the sidewalks adjoining their property.

Takoma Park’s winter weather response plan divides the city into five snow removal zones, each with an assigned response vehicle. Within each zone, “primary streets” are those with the most traffic, and those that connect neighborhoods. “Secondary streets” are shorter, with fewer homes, and include courts, alleys and dead ends. The map below identifies the Snow Zones and the secondary streets. City crews first clear primary streets then proceed to secondary streets. The city’s goal is to create two travelable lanes on each primary street within a 12-hour shift, if the snow fall is six inches or less. If the snow fall is more than six inches, the expectation is to make one travelable lane over a 12-hour period. Snow removal equipment remains in service around the clock until all the roads are cleared. To see a map of snow removal routes, go to www.takomaparkmd.gov/snow. 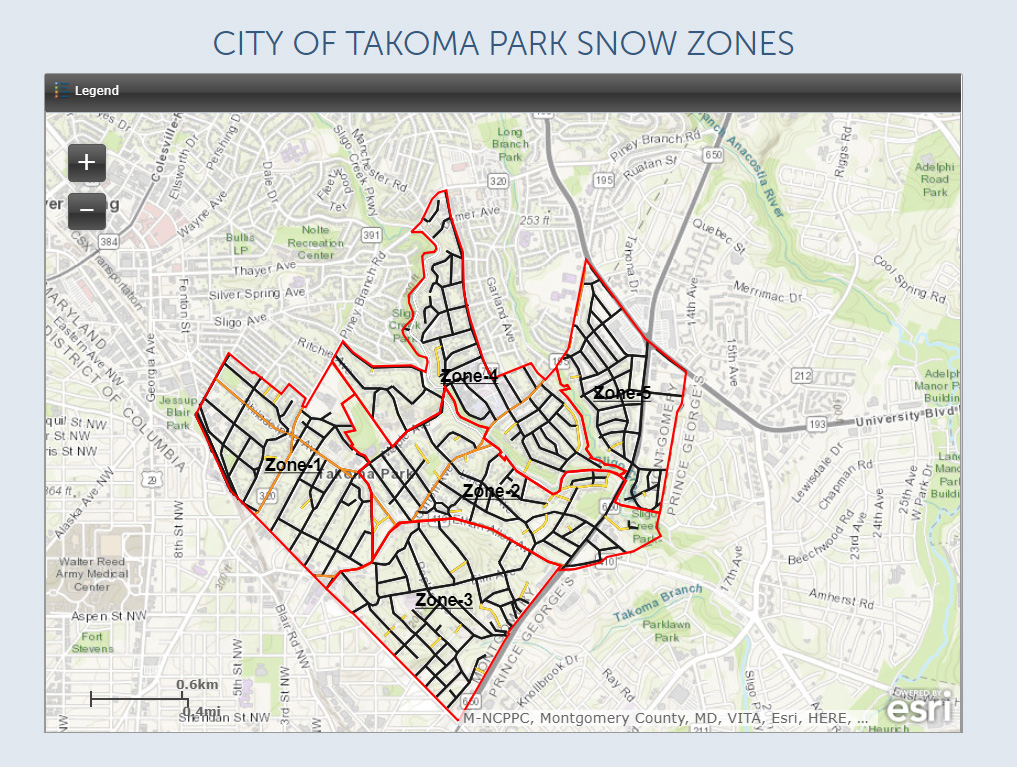 Often, when severe weather is on the way, the city begins anti-icing procedures by applying a sand salt mixture or liquid deicing chemicals to the street surface. Plowing begins once snowfall has accumulated to one inch on the street. If the storm produces only sleet and ice, the city treats roadways with sand and salt. Snow and ice response service on some streets within the City is performed by outside agencies. The State Highway Administration is responsible for clearing Carroll Avenue, Ethan Allen Avenue, New Hampshire Avenue, Philadelphia Avenue and Piney Branch Road. Sligo Creek Parkway is a Maryland National Capital Park and Planning Commission roadway and snow and ice response is performed by Montgomery County. However, city plows will assist with snow removal on these streets in the course of their work to clear city streets.

The Public Works Department has developed a few helpful tips for resident to follow during a snow event: Staying connected. Conditions leading to a declared snow emergency include the expectation of a significant quantity of snow or an ice event. The city manager may declare a snow emergency and will announce the status through Takoma Park Alert, local media, and on the city’s website, Facebook and Twitter. The following restrictions go into effect during declared snow emergencies:

Residents are strongly encouraged to park vehicles in their driveways whenever possible. Fewer cars on the street allow city plows to more quickly and safely clear the roads.

If you must park on the street, make sure to park your car as close to the curb as possible, and maintain a distance of at least 25 feet from an intersection.

Residents are responsible for clearing the public side-walks adjacent to their property. Keep sidewalks clear of snow and ice by regularly shoveling accumulated snow during and after a snow event. Please DO NOT shovel large amounts of snow into the street when clearing your driveway, lead walk or sidewalk. The best place to pile snow is on the lawn or grassy areas. Piles of snow shoveled out into the street can cause problems for passing vehicles.

Being a good neighbor and helping others in need. Reach out and ask neighbors if they need assistance with keeping their sidewalk clear. Many residents are physically unable to shovel snow and ice and are hesitant to request help from neighbors or friends. Your thoughtfulness can make a big difference to someone who might otherwise be unable to cope. If you have any questions before or during a winter event, please contact the Public Works Department at 301-891-7633.

Three Artists Explore the Beauty of Decay in Opening Reception this Thursday, Jan. 10