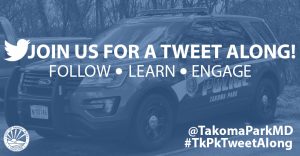 Beginning Friday, July 13, residents will be able to follow, learn, and engage with their local government in a new exciting initiative called a #TkPkTweetAlong.

The City of Takoma Park is launching a new Twitter initiative to bring residents “along” to see what it’s like to work for Takoma Park. In their 2018 Council Priorities, the Takoma Park City Council encouraged Takoma Park to be an “engaged, responsive, and service-oriented government.” This campaign will help resident get to know their government in a way that traditional communication or a website will not.

The first tweet along happening at 8:00 p.m. on July 13, will be with the Takoma Park Police Department. Additional tweet alongs will be announced in the coming months and will give an in-depth look at other departments of the City including: Public Works, Library, Recreation, Housing and Community Development, and more!

To participate in the #TkPkTweetAlong:

We can’t wait to show you all the hard work that we do, and tweet along with you!

ARE YOU PAYING MORE FOR RENT THAN YOU SHOULD BE?