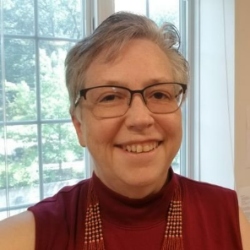 Suzanne has been important to the City government over the last 27 years, serving 7 years as City Manager. It’s almost impossible to find aspects of our municipal life that she hasn’t touched in meaningful ways. Whether it’s managing our annual budget and keeping Takoma Park fiscally strong; leading and inspiring City staff; coordinating work on key development projects; interacting directly with residents seeking information or assistance, and so many other vital initiatives, she’s had a hand in them and often played the lead role.

We were delighted that — in the last City Council meeting of Suzanne’s tenure in Takoma Park — the Council adopted a resolution honoring her many contributions to our local government, economy, and culture. Moreover, Councilmembers and residents had the opportunity to share their personal memories of Suzanne’s work on behalf of the City and their interactions with her. We wish her all the best as she moves on to a new phase in her life, with an appreciation for everything she has given to Takoma Park. You can watch a video of the tributes to Suzanne starting at the 26-minute mark. 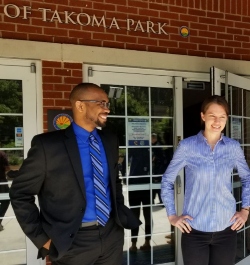 Meanwhile, you may have seen Jamal in the City, even though he doesn’t formally start as the new City Manager until August 2. He and his family will be moving to the area in the coming weeks. However, we’re pleased he’s been able to start meeting with Councilmembers and staff, not to mention touring the City and saying hello to residents. We were particularly glad Jamal said a few words at the recent swearing-in ceremony for a group of new Takoma Park police officers.

Jamal’s background, in communities large and small, in different parts of the country, with service as both a staffer and an elected official, make him a great addition to the City staff. We look forward to collaborating with him as we inaugurate a great new chapter in Takoma Park’s story. For those in the City who haven’t yet met him, there will no doubt be many opportunities to give him a warm welcome.

Of course, transitions often come with a few challenges, and this one is no exception. There’s about a month between Suzanne’s departure and Jamal’s official start date. So our Deputy City Manager Jessica Clarke will serve as Acting City Manager for that month-long interim period. Those of us on the Council have full confidence in Jessica’s ability to keep everything on track during that hiatus. We’re also confident residents will appreciate there may be a need for a little patience as Jessica and Jamal work through the learning curves they’ll be facing. You can reach Jessica at jessicac@takomaparkmd.gov. Jamal’s email, which won’t be active until he starts on August 2, will be jamal.fox@takomaparkmd.gov.