Takoma Park One Of 95 Global Cities Named as Climate Leaders

Takoma Park One of 95 Global Cities Named as Climate Leaders 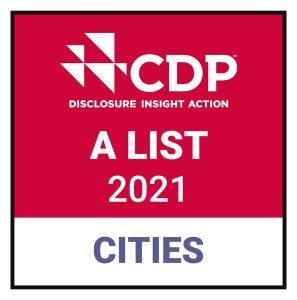 The City of Takoma Park has been recognized by Carbon Disclosure Project (CDP) as one of the top 95 cities out of 1,100 cities across the globe, taking bold leadership on environmental action and transparency, despite the continued pressures of tackling the coronavirus pandemic on local and national economies and societies.

Designed to encourage and support cities to ramp up their climate action and ambition, CDP’s Cities A List is based on environmental data disclosed by cities to the CDP-ICLEI Unified Reporting System. A clear momentum in city climate disclosure and action is building – for the first time, over 1,000 cities are reporting their environmental impact through CDP in 2021. Meanwhile, 965 cities received a rating for their climate action from CDP in 2021, a substantial rise on the 591 cities scored in 2020.

“In Takoma Park, we have taken the impact and threat of climate change seriously and have treated climate change as an urgent issue. In 2019, the City declared a Climate Emergency,” Takoma Park Mayor Kate Stewart said. “We’ve made a very public statement by declaring a Climate Emergency to pursue the necessary steps to address the global challenges, and we are willing to do our part.”

To score an A, a city must disclose publicly and have a city-wide emissions inventory, have set an emissions reduction target and a renewable energy target for the future, and have published a climate action plan. It must also complete a climate risk and vulnerability assessment and have a climate adaptation plan to demonstrate how it will tackle climate hazards. Many A List cities are also taking various other leadership actions, including political commitment from a city’s Mayor to tackle climate change.

“By dedicating ourselves to aggressive actions regarding climate adaption and resilience. We recognize the devastating consequences of inaction. The City will serve as a leader, and we hope to inspire others to do the same,” Stewart said.