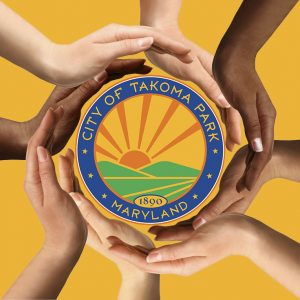 On Saturday, February 4, the City of Takoma Park and several community organizations will host a public forum, Takoma Park:  Sanctuary City — Then & Now. The program will explore the City’s 30-year-old Sanctuary ordinance and its amendments, and will underscore the City’s ongoing commitment to protect its immigrant residents under the letter and spirit of the law.  Takoma Park is one of 300+ sanctuary jurisdictions throughout the nation.

In the early 1980’s, local churches began offering sanctuary to some of the thousands of refugees fleeing brutal civil wars in El Salvador and Guatemala. This led to a series of supporting resolutions initiated and adopted by then Mayor Sam Abbott and the Takoma Park City Council. In 1985, the ordinance was passed making Takoma Park a “Sanctuary City”. Affirmed and amended several times, the last in 2007-08, the Takoma Park Sanctuary law (Municipal Code, Chapter 9.04) prohibits city police and other city employees from asking Takoma Park residents about their citizenship or immigration status. It also prohibits them from cooperating in the enforcement of federal immigration laws that could lead to the deportation of residents.

In his message to the City on Nov. 11, Takoma Park Police Chief Alan Goldberg said, “Our Constitution specifically prohibits a ‘National Police Force.’…We have no interest or authority in the deportation of immigrants. The mission and commitment of the Takoma Park Police Department is the safety and welfare of all our residents….”

Safeguarding and building trust are key community values.  Mayor Kate Stewart warmly affirmed the City’s support for its immigrant neighbors. “We are a City that welcomes those who are the victims of terrorism and violence regardless of their national origins and that refuses to demonize Muslims. We are a City that upholds the right of ALL people to live their lives with dignity and respect.”

Attendees will have the opportunity to speak and question the panel.The event will also include Takoma Park Poet Laureate Merrill Leffler and singer Rudy Arredondo. The program is free and open to the public.

Links to Documents of Interest: