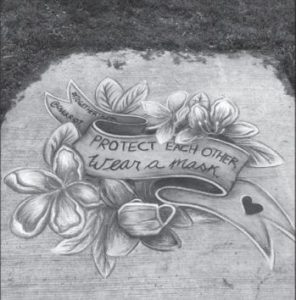 For Chelsea Ritter-Soronen and Chalk Riot, creating murals has always been about more than just the art. That’s why, when the pandemic was going into full swing and local businesses started taking major hits, she teamed with Takoma Park to find a way to help keep those businesses afloat.

“When we saw the closing of small businesses – especially those owned by immigrants and people of color – we wanted to do something to support them,” Ritter-Soronen said.

Takoma Park-based Ritter-Soronen and her team at Chalk Riotbegan making colorful murals in chalk in late March on walls and on sidewalks to bring attention to nearly 40 restaurants in Takoma Park.

“It was educational for a lot of people in recognizing that Takoma Park covers more area than people may be thinking,” she said. “We put a lot of energy and emphasis on the non-main street and Carroll Avenue establishments.”

For two months, Ritter-Soronen and her team of hired artists took to the streets painting words of safety and encouragement and urging people to shop local and support Takoma Park business in a very difficult time. “We just wanted to encourage residents to keep supporting their local businesses as much as possible,” Ritter-Soronen said. “We also did some on community safety and health. We had one on mask wearing when it was a new concept, and we did one in front of city hall that said ‘Small and Mighty.’ ” 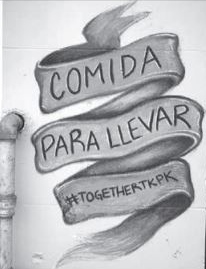 And although the chalk eventually washed away, there are still pictures and social media posts helping them live on. “Chalk is a beautiful reminder that all things pass, and it could be a good thing that nothing lasts forever,” Ritter-Soronen said. “During production of our almost 50 pieces, I listened to stories of grief, joy, resilience, COVID, immigration, birth, death. Public art can connect people, and those connections can enhance community organizing happening in pushes for a better world.” Ritter-Soronen usually works with her Austin, Texas-based partner Liza Fishbone on commissioned murals and other pieces around the country.

Ritter-Soronen, who has a background in theater design and set painting, said she first got interested in chalk art while looking to engage her community in St. Louis. “We were interested in the push for public art locally, and we were looking for ways to engage with the community in an accessible and fun way. Chalk art was the way to do that,” she said.

Currently, Chalk Riot is creating a more permanent wall-hung mural that will be placed around Takoma Park once it’s finished. “It’s still visually tied to the original campaign, and it will be a sort of cap-stone to the Takoma Park business initiative we did,” she said. “The first place it will go is the Recreation Center since it currently isn’t open at the moment, and it will be a way to keep the place active.”

Chalk art has also recently seen a major spike in interest nationally with people creating their own art pieces in front of their homes showing support for the Black Lives Matter movement. “It’s really been relevant in the past few months especially with people putting down Black Lives Matter messages,” Ritter-Soronen said “You can’t even find chalk in stores anymore!”

The name Chalk Riot is an ode to those who used chalk art to spread messages on the women’s suffrage movement to raising awareness on the AIDS epidemic of the ’80s and ’90s. “Suffragettes would use chalk to communicate where meetings would be and relay messages to each other,” RitterSoronen said. 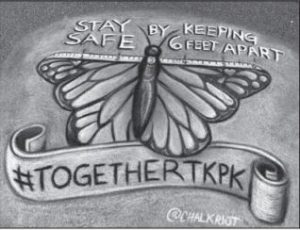 Chalk Riot is currently working to put together an online toolkit for people interested in using chalk art as a form of peaceful protest with basic how-to’s and information on chalk art’s history in activism.

Ritter-Soronen is especially grateful Takoma Park and the community took such a unique and artistic way to get the word out about businesses and safety: “It’s really encouraging that the city prioritized public art as a tool of communication and support during such a difficult time.” For more on Chalk Riot, visit chalkriotart.com or check them out on Instagram @chalkriot.