Wolfgang Mergner is a 2020 Montgomery Serves Award winner. He won the Neal Potter Path of Achievement Award. As noted on website for the award, honorees “have demonstrated remarkable commitment to direct volunteer service in our community, earning them Montgomery County’s highest recognition for volunteerism.” 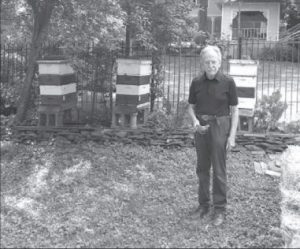 Mergner has lived in Takoma Park since 1987. His deep and meaningful engagement with the community began almost immediately. “At that time, we had a lot of problems in our neighborhood … and crime, so we formed a neighborhood patrol with the help of the police,” he said. “We would walk every night in our neighborhood.”

Mergner subsequently worked with others and approached the Takoma Park City Council about creating a safety committee. He became the first member and then chair of the Public Safety Committee. The body was created in 1995. He chaired the committee from 1997 to 2001.

“Then emergency preparedness became an important thing; so the Emergency Preparedness Committee was formed,” he said. Mergner was a member of the committee from 2004 to 2011; he served as chair from 2008 to 2010.

Additionally, he was involved in creating the Community Emergency Response Team (CERT). According to him, that CERT was very active for emergencies, including heavy weather like snow. “Residents of Takoma Park enrolled in this program for training and service in emergencies, such as shelter maintenance,” he said.

In 2002, Mergner became president of the Old Town Residents’ Association. He held the position for a few years. “It’s important to be organized and to represent your neighborhood,” he said of leading the organization.

Through the years, Mergner developed and maintained a keen interest in mediation. He joined the Takoma Park Mediation Program. He served as a board member from 2000 to 2004 and chaired the board in 2004. Mergner noted, “It’s very important to have mediation available in conflict resolution.” He was also a board member of the Montgomery County Conflict Resolution Center and copresident in 2010.

Mergner has extensive mediation experience. He spoke in detail about senior mediation. This interested him because he discovered that families were having so many fights over seniors, including matters pertaining to inheritance or discussing who would take care of seniors. “We saw mediation as a very good way of helping families come to an agreement as to how they handle these matters,” he said. And then his interest in seniors let him to his next big project.

“Pretty soon we discovered that seniors in Takoma Park needed more than mediation,” he said. “There were a lot of problems.” That was in 2011.

Mergner and others had seniors complete a questionnaire to better understand the group’s needs and desires. Transportation and access to doctors were big issues. “We decided to create a village,” he said. “In this case, a village means a grassroots organization that helps seniors live with dignity.” And the Village of Takoma Park was born. “We became and incorporated, non-profit organization in 2014,” he said. Mergner emphasized that creating and maintaining the village would not have been possible without significant and sustained volunteer support. Sandra Egan, Linda Carlson and Kathie Baker played big roles. From Mergner’s perspective, “these people need to be mentioned because they did extraordinary work.”

“Wolfgang’s a visionary,” Carlson said. “He had a vision for an organization built around the idea of neighbors helping neighbors, with a focus on seniors, and deserves enormous credit for the successful creation of the Village of Takoma Park, as does his wife Gertrud.”

Carlson, who has lived in Takoma Park since 1981 and been chair of the village’s communications committee since 2014, added that “[h]is gentle persistence, dedication to service, kind-heartedness, and firmness of purpose have been a real inspiration to many who have come to know him through his activities both with the village and in the broader community.”

Mergner served as president of the Village of Takoma Park for four years and retired in 2015. He’s most proud of the way that the village has grown. It now has about 250 members. At any given point, there are about 75 volunteers. (The membership number includes both volunteers and those who are being served.)

When it came to helping seniors, Mergner mentioned that his wife Gertrud was an enthusiastic supporter of the idea. She indicated that she would help him if he went down that path. “That was a very strong motivator,” he recalled.

Egan, who has lived in Takoma Park for nearly 39 years, believes the Village of Takoma would not be happening if it weren’t for the commitment that Mergner and his wife had to seniors. Egan currently serves as volunteer coordinator for the village, a position she’s held since 2014.

Professionally, Mergner was a medical doctor and an academic. He retired as professor emeritus from the University of Maryland in 1998. He earned his doctorate at Duke University. He was a pathologist and researcher in heart disease.

Mergner is staying busy. He took a course at the Takoma Park Community Center on memoir writing and is currently working on a book: “There are many people like me who suddenly discovered they have a past.”

“I had a very traumatic life, from being born in Africa, coming to Germany and having to adjust to Germany society,” Mergner said. He alluded to his experiences during World War II. He moved from Tanzania to Germany in 1940, when he was seven years old. He immigrated to the U.S. in 1964. “There are a lot of things to talk about,” he said. “Once you start writing things down, many, many things come to your memory.”

Mergner has seen and done so much. He has lived a full, meaningful life and contributed a lot to the Takoma Park community. And yet, he strikes you as someone who still has a lot more to give.