As the members of the newly formed Takoma Park People of Color Collaborative put it, they really hit the ground running.

What started in September 2018 as a Takoma Park Listserv discussion about systemic police abuse toward black and brown
people has already grown into so much more, a way to give those very same people stronger representation and support in the community.

“We were feeling very marginalized and disregarded, so we met and talked about our love of Takoma Park,” said Rita Monto ya, one of the group’s founders. “We kind of realized that even though it’s a very liberal and well-educated area, representation of black and brown people is minimal, and we still feel marginalized.” 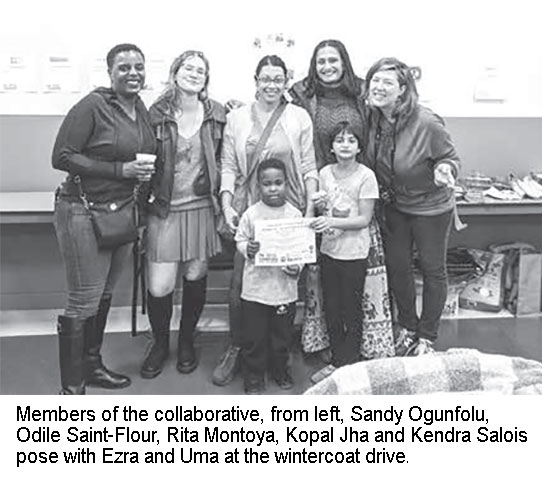 In October, the group held its first meeting with around a dozen or so people at what has become a de facto headquarters of theirs, Clippers and Combs barbershop on Flower Avenue.

“It was a small group, but we were very talkative from the beginning,” Montoya said. The group discussed the community and its demographics and history and brainstormed all the ways they thought they could help.

“We’re putting together resources and a hub for people to get together,” said Aubrey Henry, the owner of Clippers and Combs. Henry also coaches and gives jobs to kids in the community. “There’s a lot of little things around here to do and a lot of little holes that need to be filled.”

The group also noticed that many children or mothers with children didn’t have coats as the weather was beginning to turn colder, so they decided their first initiative would be a winter coat drive. “The first thing was to speak to local businesses to be drop off points for the drive,” said group member Sandy Ogunfolu. “We were very well received … and momentum picked up very quickly.”

In just a few short weeks, the collaborative was able to gather over 500 pieces of warm winter gear like coats, hats and gloves. They also got help from the City of Takoma Park, which offered space to hold a coat distribution event in November. “It was a very cold, chilly and rainy night, which wasn’t as well attended as we would have liked,” Ogunfolu said, “but we are more into getting things done and we set a very good tone with the first drive.”

They also noticed something else at the distribution event. “We didn’t get a lot of people at the coat distribution, but many came to collect coats for friends and family who needed them,” member Kendra Salois said. “The reach was much further than just the day and the event.”

And the collecting didn’t end there. Salois said after the first coat drive someone from the community reached out to the group asking for help in gathering supplies for dozens of families displaced in an apartment fire in Northwest D.C. “Since we already had everything in place with the coat drive, we kept up the collecting,” Salois said.

And in just about a week the group had collected 40 bags of clothes, toys, feminine hygiene products and other supplies for the families in need. “Both these events really highlight the generosity of our neighbors,” Salois said. “And it really shows the affluence of the area with the high-quality of products being dropped off.”

Any leftover warm-weather gear that wasn’t taken was given to the Takoma Park Police’s annual winter coat drive.

In January, the group planned to get their main initiatives settled and spoke with representatives from Takoma Park’s Housing and Community Development Department to get in contact with their target audience in the area. “We want to work with a purpose and make sure what we do yields the highest help for people,” Ogunfolu said. “We don’t mess around.”

“We’re really interested in anyone who wants to make positive impacts on people of color in the Takoma Park area,” Ogunfolu said. “All are welcome, we are very inclusive, and our doors are open.”

In the meantime, the group is looking forward to the New Year and new ways to help those undeserved and underrepresented in the community. As Montoya said, “2019 is going to be an exciting year for the collaborative.”

The State of Sustainability in Takoma Park