You can find public art across Takoma Park, including sculptures, murals, and more. This public art map shows the locations of City-funded public art projects so take a trip around town and check them out! Here is a sampling of some of some of our projects.

B.Y. Morrison Park at the Takoma Junction received a kid-friendly makeover in 2021 with a new chalkboard mural, colorful painted tables, and children’s games stenciled on the concrete.

Local artist Zahava Frank was hired to paint a donated piano that was placed in the downtown gazebo in 2019. Watch this WDVM segment to hear some highlights from the opening concert where more than a dozen local pianists shared their talents. The piano was a popular attraction that could be played by anyone. It was removed after about six months due to the changing winter weather.

Fiber artist Stacy Cantrell created a giant 17-foot-tall crocheted octopus that landed on the downtown Takoma Park clock tower in 2018. It lived there for about six months before it was given to the Takoma Children’s School in a City-sponsored contest. You can see Cantrell leading a parade of kids who moved the octopus to their school in this WJLA Channel 7 piece.

Artists David Shulman and Howard Connelly collaborated on an interactive installation titled Bird Calls, which reprogrammed a pay phone so it plays bird calls from local bird species along with information about the birds.  Push button 5 and you hear a rooster in homage to Takoma Park’s legendary Roscoe. Dial a 7 and you’ll hear a pileated woodpecker. Check out this fun WJLA Channel 7 piece about the phone which was refurbished in 2019 with a new canary-yellow handset and two large feather banners.

Muralist Michael Kirby painted a mural on the 253-foot-long concrete retaining wall facing New Hampshire Avenue at the corner of Conway and Prince George’s Avenues.  The mural was completed in 2017 after meetings with community members. 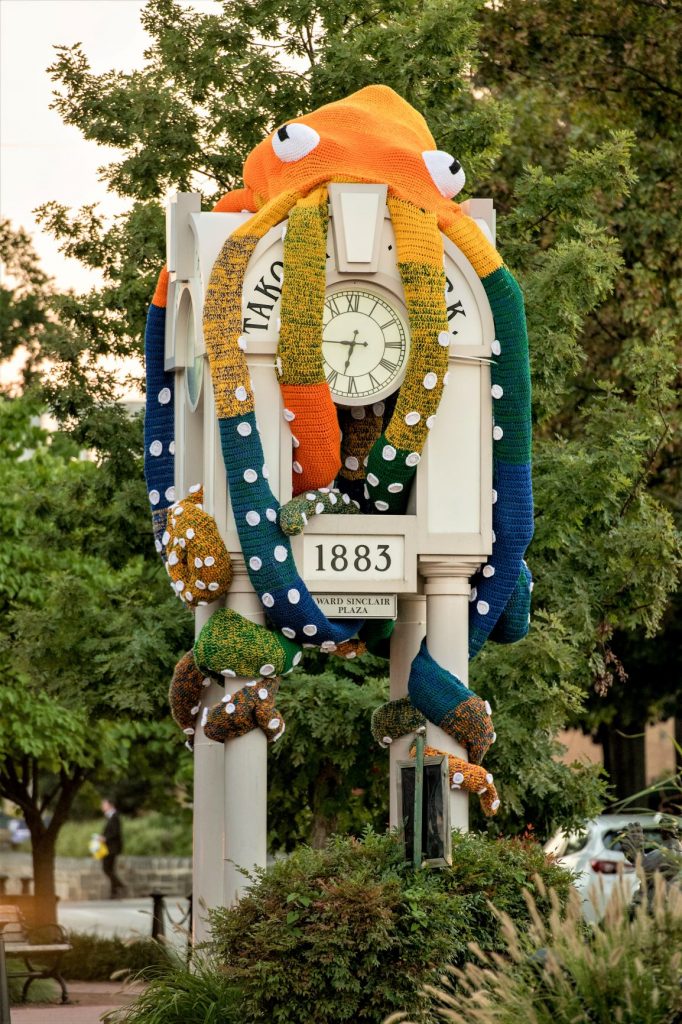