About the Streetlight Replacement Project

The goal of the streetlight replacement project is to improve the quality of street lighting in Takoma Park. Benefits of the project include energy savings, cost savings, reduced light pollution, improved reliability, and an improvement in overall quality of street light. On October 24, 2018, the City council approved staff recommendation to replace the existing streetlight with LED fixtures through the PEPCO conversion program.

Lighting Maintenance Inc. a subcontractor for PEPCO began the street light replacement the  second week of December, 2018 and completed the work in July, 2019.

Residents who wish to request additional shielding on the new streetlights in the case of light intrusion into bedroom windows can send an email with the request, address, and your contact information to: publicworks@takomaparkmd.gov. Please include the pole number for the fixture and nearest address.

The discussion concerning the benefits of replacing the City’s streetlights began about ten years ago. The discussion  has included staff presentations to City Council in April, 2015, March, 2016 and October, 2016. At the October 2016 meeting, City Council authorized staff to pursue the conversion of existing streetlights to LED technology via Resolution 2016-41. The Council Resolution directed staff and Pepco to ensure that all replacement fixtures be International Dark Sky Association (IDA) Certified,  3,000 Kelvin according to IDA requirements, and address areas that may be over lit or under lit throughout the City.

Following the Council’s Resolution, Pepco initiated a full inventory of existing streetlights to identify the light levels, type, and location of each streetlight for which the City was billed. Based on that inventory, the street lights in the City are currently 80% high pressure sodium, 9% incandescent, 6% mercury vapor, and 5% LED.

The number of each type of streetlight to be replaced: 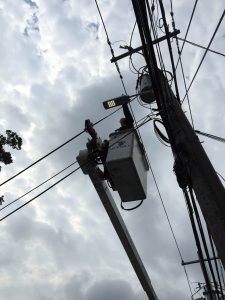 Based on Pepco’s calculations, the reduction in energy use and maintenance costs will result in a savings of approximately $50,000 to $100,000 annually. The overall cost of the program is expected to be $372,000 and the City anticipates a $260,000 rebate from the Empower Maryland Program. Based on the projected annual savings, the program will pay for itself in less than two years and those savings from reduced energy use and maintenance costs will carry through for the life of the fixtures.

2018: December, PEPCO Sub-Contractor Lighting Maintenance Inc. to begin the replacement in Ward 6, then move through the wards in reverse order (5,4,3,2,1)

2018: October 1, Second test fixtures installed or updated on Hickory Avenue. A tour of LED installations will take place on October 8, 2018. Interested parties should meet behind the Community Center at 7:30 pm.