Pests & Diseases Listed on this Page:

∗If a picture is too small, click on photo to enlarge∗

Takoma Park has experienced substantial dieback of its mature oak trees in recent years.  Some trees seem to die suddenly without an obvious cause.  University of Maryland Extension (UMD Extension) has studied this situation and determined that the cause of this decline is primarily due to the stress induced by periods of extraordinary volumes of rain and of extended drought starting in 2018.  Often insect pests like ambrosia beetle or fungal infections like hypoxylon will invade the tree after its vigor is reduced.  See UMD Extension’s article documenting their analysis and conclusions on the situation. 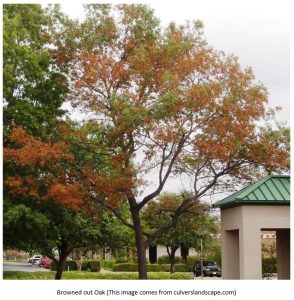 Ambrosia beetles attack stressed, dying, or dead trees, as well as recently cut lumber before it dries out. Mature ambrosia beetles are usually a small reddish brown to black in their appearance, with a cylindrical shape ranging from about 1/8-3/16 inch (3-5mm) long. The larvae will appear small, white, and legless. The ambrosia beetle has four stages in its life cycle: egg, larva, pupa, and adult. Adults will burrow into a new tree creating small, perfectly round holes that are usually accompanied with a dark brown fungal stain. As they bore into the tree, ambrosia beetles will expel frass onto the bark or base of the tree.  This frass appears as a tube or sprinkling of sawdust.  The tubes very fragile and will quickly get broken off by wind or rain.  When trees are stressed they emit an ethanol response, which is one of the key factors female ambrosia beetles look for when boring into a new tree. The most common stressors that leads to this attack is flooding and frost damage. When ambrosia beetles burrow into a new tree, they also inoculate the trees with a fungus.   Ambrosia beetles tend to attack trees that are already stressed. The fungal infection that this beetle induces can quickly clog the vascular system of the tree and cause it to die . 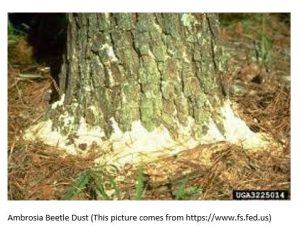 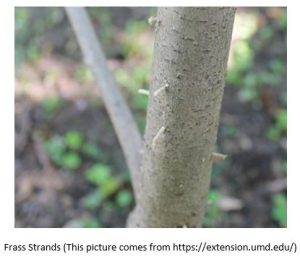 Check out these sources to learn more about the Ambrosia Beetle:

Agrilus planipennis, the Emerald Ash Borer, is native to Asia and arrived to the U.S. in solid wood packing materials. Since 2002, when it was first detected, millions of ash trees have died. Mature beetles are typically 1/2-inch-long and 1/8-inch-wide, a bright metallic green color and about the size of a dime. Their larvae are white, legless and flat-headed and their eggs are a reddish-brown color, extremely small and about 1/25th of an inch. After infestation, small trees can die as soon as 1-2 years and large trees die off in about 3-4 years. The symptoms of Emerald Ash Borer  are thinning/dying crowns, suckers at the base of a tree, splitting bark, tunnels under bark and small D-shaped emergence holes. The most effective treatment for an infected tree would be a systemic insecticide injected into the trunk by a trained professional. 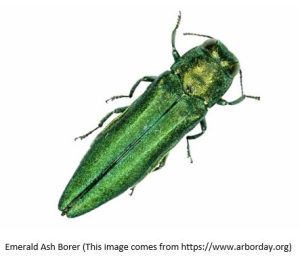 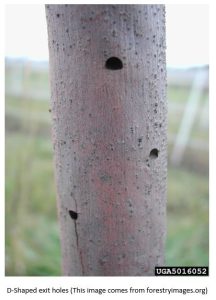 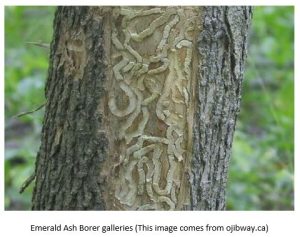 Check out these sources to learn more about the EAB:

Bacterial Leaf Scorch is caused by the bacterium Xylella fastidiosa and is a systemic disease. The bacterium invades the xylem (which is the water and nutrient conducting tissue) of the tree and can spread through xylem-feeding insects like leafhoppers, spittlebugs and tree hoppers, as well as through root grafts. It is most commonly found in Pin, Red, Shingle, Bur and White oaks, but can also affect Elm, Sycamore, Mulberry, Sweetgum, Sugar maple and Red maple. This disease is chronic and potentially fatal. The most noticeable symptom is a particular pattern of premature browning of leaves in mid-summer. The leaf margins will start turning brown with a narrow yellow border separating it from the healthy green tissue.  The only way to confirm diagnosis of bacterial leaf scorch is through laboratory analysis but symptoms will become progressively worse over a period of 3-8 years. Sadly, there is no treatment for Bacterial Leaf Scorch. 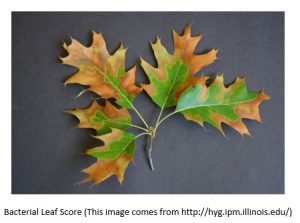 There are numerous species of wood decay fungi.  Some only attack dead wood tissue while others can decay living tissue.  Decay of living wood is caused by fungi belonging to the Basidiomycota (basidiomycetes) and Ascomycota (ascomycetes). Some of the more concerning varieties of fungi that attack living tree tissue commonly seen in the Takoma Park area include the following: 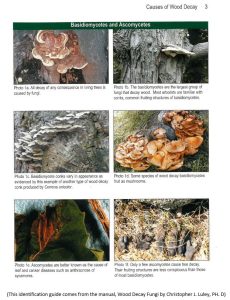 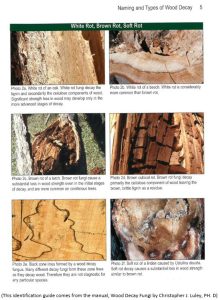 Check out these sources to learn more about Wood Decay Fungi:

Rhizosphaera needle cast is a fungal disease that causes the needles of spruce trees to become brown and fall off. Rhizosphaera needle cast is more likely to affect trees that have been damaged by drought, poor planting procedures, or other stresses. Often the disease starts with the innermost, lowest needles of the tree while the youngest needles at the tips of the branches remain healthy. With a magnifying glass you may be able to see rows of little black spheres along the length of a diseased needle. These black spheres are the fruiting bodies (reproductive structures) of the fungus which causes this disease. Rhizosphaera needle cast is most common in the Colorado blue spruce but can also affect other conifers. 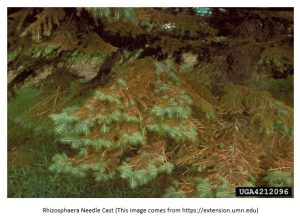 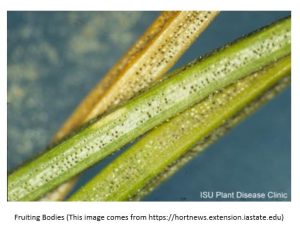 Check out these sources to learn more about Rhizosphaera Needle Cast:

Lycorma delicatula, the Spotted Lanternfly, is native to China. In 2006, this planthopper spread to South Korea and then in 2014 to Pennsylvania. Since then there have been confirmed sightings in New Jersey, Delaware, Maryland and Virginia. Its favorite host is the Ailanthus altissima, the Tree-of-heaven, also native to China but is known to feed on a wide variety of plants. This invasion is an on-going issue but so far the plants that are affected by this insect include; Almond, Apple, Apricot, Basil, Blueberry, Cherry, Cucumber, Grape, Hickory, Hops, Horseradish, Maple, Nectarine, Oak, Peaches, Pine, Plum, Sycamore, Walnut, and Willow.  As an adult, the Spotted lanternfly is about 1 inch long and a greyish brown with black spots in appearance. When their wings are open, they display a bright red color. The damage is caused to these plants in two different ways. The nymphs and adults use their piercing mouthparts to feed off of the fluid from the stems or leaves. This causes reduced yield, stunted growth, localized damage and in some cases, death. The second way damage is caused is through the sugary secretion the Spotted Lanternfly makes while feeding. This substance is called honeydew and attracts ants, wasps and other insects as well as is readily colonized by mold. The mold then causes parts of the plant to blacken which reduces photosynthesis. (click on image to enlarge) 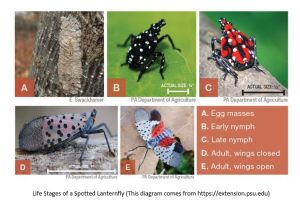 Check out these sources to learn more about The Spotted Lanternfly:

Click here to report a sighting of the Spotted Lanternfly

Agrilus bilineatus, commonly known as the Two-Lined Chestnut Borer, is an insect attracted to stressed or weakened oaks. Drought, root injury, soil compaction, road salt injury, defoliation by leaf-feeding insects, poor soil drainage, and weakening from other diseases are all factors that predispose oaks to an attack.  Eggs hatch in the bark crevices of the tree. The larvae are white, slender, legless and have an enlarged flattened front end, feeding off the cambial tissue of the tree. As they feed they cut off the tree’s flow of food and water. Adult beetles are greenish-black in color with two yellow stripes along their back and are about 1/5-1/2 of an inch in length.  An oak will exhibit the following symptoms if under attack; dieback at the end of branches, wilted foliage, and a sudden browning of foliage. Management of this insect starts with prevention, healthy trees will not attract the Two-Lined Chestnut borer. If infestation has already occurred you can prune off infected limbs and use a systemic insecticide treatment. Contact a professional before using any pesticide. 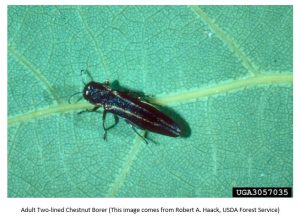 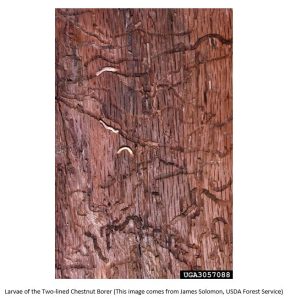 Check out these sources to learn more information about the TLCB!

Lymantria dispar, the Spongy Moth (formerly known as Gyps Moth), is native to Europe and was accidentally released in Massachusetts in 1869. The first serious infection in Maryland of the spongy moth dates back to the 1980s. While the spongy moth’s favorite tree to feed on is an Oak, they also attack Sweetgum, Linden, Willow, Birch, Apple, Alder, Boxelder, Hawthorn, and Blue spruce. Spongy moth caterpillars feed May-June and. The spongy moth has 4 stages of its life cycle; Egg, Larva, Pupa, and Adult. Depending on the temperate, eggs will hatch late April to early May.  A mature caterpillar can be 2-2 ½ inches in length and can have up to 5 pairs of blue dots and 6 pairs of red dots on its back.  The adult moths emerge in late June to July. Removing the egg masses of trees in April, using sticky barrier bands to trap young caterpillars and using hiding bands to remove caterpillars are all possible management strategies.  Size of spongy moth populations very from season to season and as of 2022 have not been of serious concern to trees in the Takoma Park area in recent years. 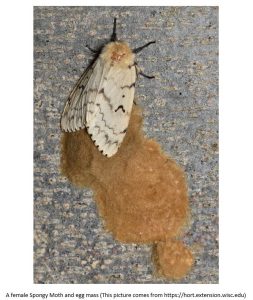 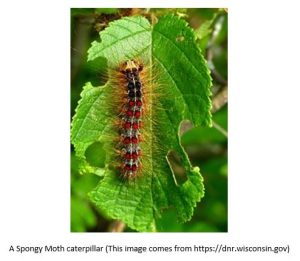 Check out these sources to learn more information about the Spongy Moth!

Table of Contents for Urban Forestry